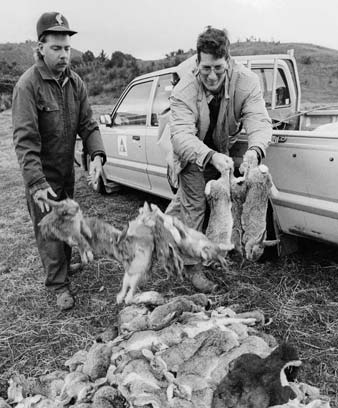 Rabbits were introduced to New Zealand in the 19th century for food and sport. But they soon became a pest, reaching plague proportions in some areas. Rabbits have cost the country millions of dollars – through attempts to control them and lost production on farmland.

Rabbits were brought to New Zealand in the 19th century, for food and sport.

Rabbits breed quickly – one female can have 45 babies in a year, and numbers can increase eight- or tenfold in a season.

New Zealand has had several rabbit plagues. In the South Island, rabbits became a major problem in Marlborough, Canterbury, Southland and Otago. In the North Island they spread mainly in Hawke’s Bay and Wairarapa.

The impact of rabbits

Plagues of rabbits are a serious problem on farms, as they eat the plants that would provide food for sheep. The farms then produce less wool and meat, and lose money. In some parts of Otago, farmers had to abandon their sheep runs because they were overrun by thousands of rabbits.

Rabbits also damage the environment. In drier areas, they have eaten all the plant cover, and it has not grown back. The exposed soil is prone to erosion by wind and rain. Rabbits’ burrows can also cause erosion.

Farmers and the government have spent millions of dollars trying to get rid of rabbits. Until the 1950s, the skins or meat of dead rabbits were sold to Britain.

Methods that have been tried include:

None of these methods has been completely successful. Rabbits are still a big problem for New Zealand farmers.

Print the full story
Next: Page 1. The spread of rabbits in New Zealand Next