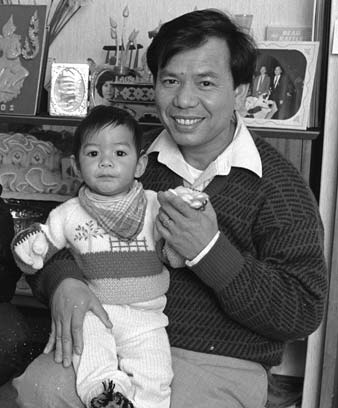 Most Laotians came to New Zealand as refugees in the late 1970s and early 1980s. They were fleeing atrocities perpetrated by the Pathet Lao, in what became known as the Killing Fields of Laos.

Remains of a family by Elizabeth Sheppard

Most Laotians came to New Zealand as refugees in the years after the Communist Pathet Lao party overthrew the country's 600-year-old monarchy. A rule of terror followed; between 1975 and 1995, 300,000 people were tortured and killed. During this time, thousands fled across the border into Thailand, living in camps until they could be resettled in other countries.

New Zealand agreed to accommodate 70 families in 1977, and a further 239 individuals in the early 1980s. Arriving in Auckland, the new arrivals were given a place to live and English lessons.

As the political situation in Laos gradually improved, fewer came to New Zealand as refugees. Recent immigrants have arrived as part of the family reunification scheme.

The population has generally fitted in well, while still keeping their cultural identity and religion. But adapting to a new life was difficult; although volunteer sponsors provided support, Laotians struggled to overcome feelings of grief, and to find meaningful work.

Print the full story
Next: Page 1. Immigration: escaping the Killing Fields Next