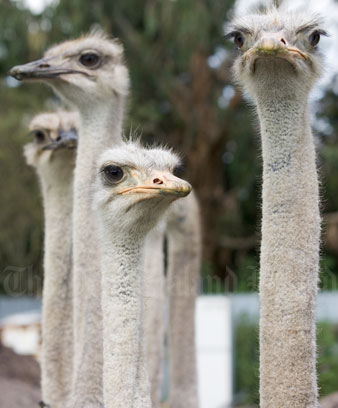 Although sheep and cows make up the vast majority of farm animals, New Zealanders have tried farming many different species. Some of the most successful are goats, alpacas, llamas and ostriches.

People have introduced many animals to New Zealand for farming, hunting, controlling pests or for work. Some, such as zebras, squirrels and gnus, were brought just because they were interesting.

Hedgehogs were introduced around New Zealand because they eat the slugs, snails and grubs that damage plants.

Ferrets, rabbits and possums were hunted for their fur, but are now pests because they damage native plants and animals. Fur from wild possums that have been trapped or shot is used to make clothing.

Angora goats have been farmed for their mohair fibre, which can be sold for higher prices than wool from sheep.

Alpacas and llamas both come from South America. They are farmed for their fibre, which is soft and silky, and is made into warm clothes. Alpacas are often shorn lying down, to keep them still.

Only a few water buffaloes are farmed in New Zealand. Buffalo meat is low in fat and cholesterol, and a small amount of cheese is made from river buffalo milk.

Ostriches and emus are both farmed for meat, but there is also a market for ostrich leather, feathers and eggs, and emu oil. Because they are large birds, farms need very high fences.

Print the full story
Next: Page 1. Introducing animals Next