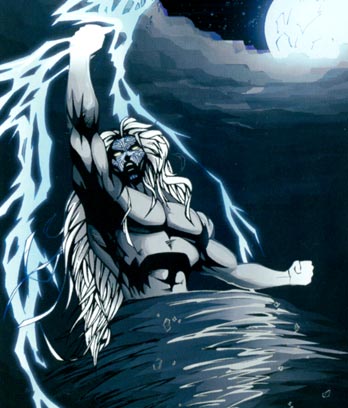 New Zealand’s rapid weather changes, frequent rain, distinctive cloud patterns and strong winds all had a huge influence on the daily life of Māori. Each region developed a rich store of words, sayings and traditions relating to the domain of Tāwhirimātea – god of the weather.

The weather was very important in Māori life. The seasons, the wind and the rain affected daily activities, especially growing crops and fishing. There are dozens of words to describe the weather. There are also stories to explain wind, thunder, rainbows and other natural events.

In Māori tradition, Tāwhirimātea is the god of the weather. His parents were Ranginui (the sky father) and Papatūānuku (the earth mother), who lay close together. To let light into the world, Tāwhirimātea’s brothers separated their parents. But Tāwhirimātea did not agree to this. To show his anger he sent out his children, the four winds, and clouds that brought rain and thunderstorms.

This destroyed trees in the forests ruled by his brother Tāne. But Tāwhirimātea could not defeat his brother Tūmatauenga, god of the people. The battle between people and the weather continues today.

Different cloud patterns are named after familiar things, such as a belt, or rows of soil. People predict the weather from certain clouds. Clouds that bring rain and wind are called ‘atiru’.

It often rains in New Zealand, so there are dozens of words to describe rain. Raindrops are linked with the sadness of death, because they fall like tears.

Tribes have their own names for local winds. In Taranaki, ‘pieke’ is the east wind with rain. Tohunga (priests) used prayers to change the winds, for instance so that people could go fishing.

Whaitiri is the goddess of thunder, which also has other names. Tama-te-uira is the god of lightning. A lightning strike on a tribal mountain is a sign of death, perhaps the passing of an important chief.

Print the full story
Next: Page 1. Origins of the weather Next