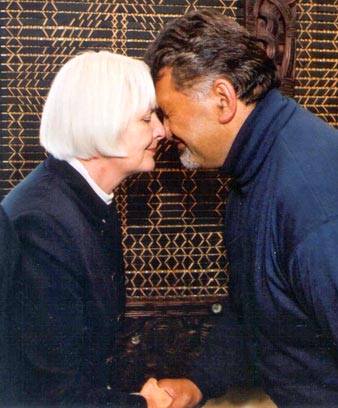 Ngā Rauru Kītahi take their name from the ancestor Rauru. With a reputation as a warrior and man of his word, he was called Rauru Kītahi – ‘Rauru of the one word’. It is a great compliment to be described as like Rauru – true to your word.

The traditional lands of the south Taranaki tribe Ngā Rauru Kītahi extend between the Wanganui and Pātea rivers. Ngā Rauru descend from an early tribe called Te Kāhui Rere (the flying people), who lived around Waitōtara. Members of Te Kāhui Rere intermarried with the people who arrived in south Taranaki aboard the Aotea canoe.

The tribe is named after an important ancestor, Rauru Kītahi (Rauru of the one word). A grandson of the early Polynesian explorer Toitehuatahi, Rauru was born at Whakatāne and travelled extensively. He ended his days with the people of south Taranaki, who named themselves in his honour.

In the early 19th century, Ngāti Toa from Kāwhia and other Taranaki peoples moved south into Ngā Rauru territory in search of new land and resources. When Europeans settled in the area after 1840, some of the tribe were willing to sell land to the government, but others objected. The refusal to sell led to war between the government and Māori in the 1860s. A large amount of Taranaki land was taken by the government, including 60,700 hectares of Ngā Rauru territory, and some people were put in prison. Ngā Rauru people took part in the passive resistance protests at Parihaka in 1881, and some were imprisoned by the government.

Moves to compensate Ngā Rauru for land confiscation and the loss of their livelihood began in the 1880s, but were ineffective. It was not until 2003 that the tribe signed a settlement with the government that gave them financial and other compensation, and an apology.

In 2013 the tribe had more than 4,000 members, belonging to 14 sub-tribes. The tribal authority organises commercial ventures, such as making traditional herbal remedies. It is also working to revitalise Ngā Raurutanga – the values, customs and beliefs that are unique to Ngā Rauru.

Print the full story
Next: Page 1. Early history Next