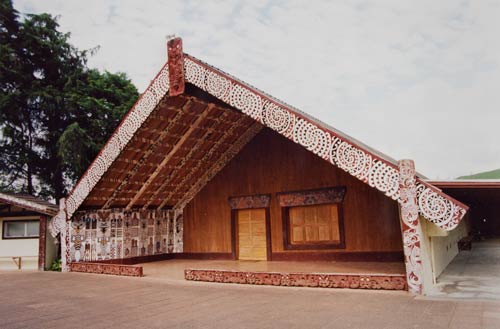 The Rongopai meeting house is at Waituhi, on the road between Ormond and Pātūtahi on the Poverty Bay flats. Built in 1888, it was a dramatic departure from the carved style that characterised most meeting houses. Its distinctiveness can be seen even in this distance shot, in particular the maihi (barge boards) and the panels on the paepae (front of the meeting house), which are painted rather than carved.

Writer Witi Ihimaera, for whom Rongopai is a family marae, described its painted interior panels as ‘tall trees, elaborately painted in greens, blues and reds ... fantastic birds flit through the forest. People climb about the branches, and the glittering creatures of Maori mythology twine among the rafters.’(Witi Ihimaera, Whanau. Auckland: Heinemann, 1974, p. 123)