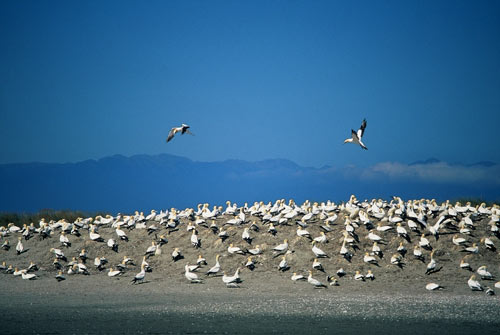 Farewell Spit's gannet colony established in 1983 when about 70 pairs of gannets nested on shelly sand banks. New Zealand's only other accessible mainland gannet colonies are on rocky outcrops at Muriwai and Cape Kidnappers in the North Island. The Farewell Spit colony is only a few metres above sea level, on sand around 30 minutes walk beyond the lighthouse. The location can be hazardous for gannet chicks, as their nests are only a few metres above normal high-tide level. During a severe storm in January 1997 waves washed away most of the chicks on their nests. However, the colony survived and by 2000 it numbered between 2,000 and 3,000 adult birds. Groups of up to 20 people can visit the colony on organised tours between September and April.