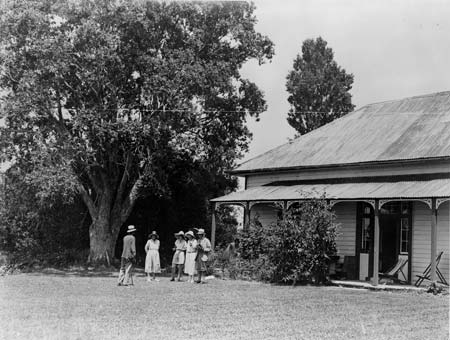 In 1932 the house and grounds of James Busby, British Resident from 1833 to 1840, were gifted to the nation by the governor-general, Lord Bledisloe, and his wife. Because it was the site of the first signing of the Treaty of Waitangi, the house has become known as the Treaty House. A trust board was set up, the house was restored, and it became a historic site and the focus of treaty commemorations. This photograph shows a group of people, including Lord and Lady Bledisloe, outside the house around the time of its presentation to the people of New Zealand.