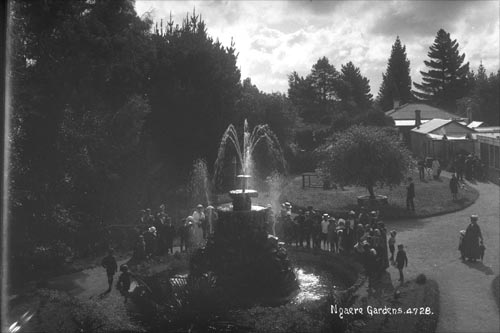 Between 1910 and the 1930s, the Ngaere Gardens were the showcase of central Taranaki and attracted huge numbers of visitors and picnickers. The gardens were established by Charles Sanders, who bought and cleared the land in the early 1880s. In 1886 he and Arthur Walker began to plant the section and to dig a lake. Albert and Jessie Truelove took over the gardens in 1909, and put in a zoo, paddling pool, water chute and water wheel. Although the ‘magna vox orchestrala’ (a hand-operated organ) could often be heard several kilometres away, the greatest excitement was from the water chute and its 18-seat punt that hurtled into the lake. With the railway station nearby, visitors could easily travel from New Plymouth and Hāwera. However, from the 1930s the gardens’ popularity waned, and in the 1970s they were closed to the public.