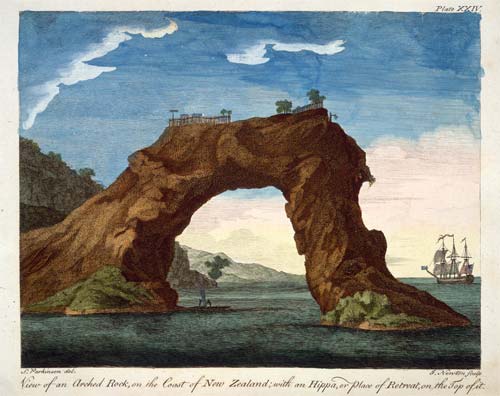 This hand-coloured engraving was made by Sydney Parkinson, the artist on board James Cook’s Endeavour in 1769. It shows a fortified pā on top of an arched rock (which was later to collapse) in Mercury Bay, where the expedition stayed for 10 days in November. Cook commented on another fortified pā in the bay that ‘it should seem that this people must have long and frequent wars ... otherwise they never would have invented such strong holds as these.’ (James Cook, Journal, 12 November 1769, http://southseas.nla.gov.au/journals/cook/17691112.html (last accessed 27 October 2010))