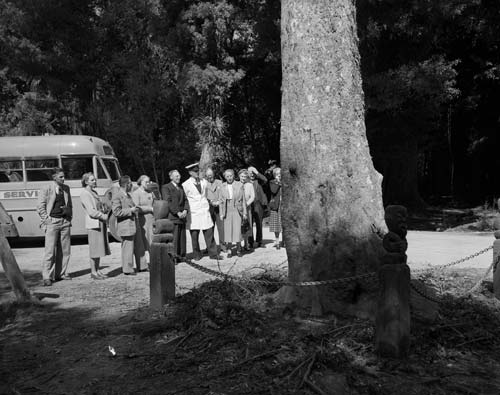 These tourists are looking at a large mataī growing beside Te Ara-o-Hinehopu, a track between Lakes Rotoiti and Rotoehu, in 1950. The path is named after Hinehopu, a woman of high birth who lived in the area around 1620. It is also called Hongi’s Track, after the leader of a Ngāpuhi war party who dragged their canoes between the lakes some 200 years later. The tree is known as Hinehopu’s wishing tree – as a baby, she was hidden there from enemies by her mother. It was at this spot that she later met her future husband Pikiao, the forebear of the Ngāti Pikiao people.