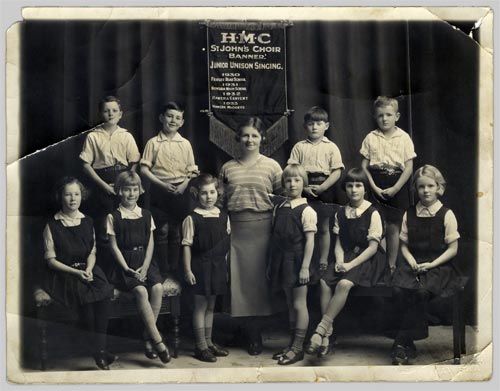 The Hāwera Midgets, 1933 winners of the Hāwera music competition for junior unison singing, pose for the camera with their music teacher, Winifred Huggins. In the mid-20th century Hāwera was home to a rich variety of musicians and musical activities, as Ann Trotter – whose brother Ron and sister Jetta are in the photo at top and bottom right respectively – remembers.

All kinds of music are important in my memories of Hāwera. In the park opposite our house, the prize-winning brass band, led by Mr Fox, and the pipe band, led by Mr Nairn, practised marching on summer evenings.

I attribute my abiding interest in orchestral music to seeing the Hāwera orchestra at a very early age. Less professional than the bands, it was led by Mr Fox, and held together by members of the Fox family who were joined by rather unlikely locals. It performed, if not with accuracy, with a wonderful serious enthusiasm that I still recall.

Hāwera Main School, which I attended, had a so-called band-room. Here Mr Fox presided, teaching a variety of brass and woodwind instruments after school. There were many teachers of stringed instruments, of the piano and of singing in the town. It seems to me on reflection that a remarkable number of the citizens, young and old, took advantage of the opportunities this situation offered. The climax for these students came when the annual Hāwera competitions took place. Such excitement! As children we played ‘competitions’ for days afterwards, performing duets and copying the more extreme styles of singing and dancing we had seen.

Like many girls I learned the piano. My teacher was a fiery Irishwoman who was wont to shriek, ‘Heaven grant me patience!’ as I lost a chord or two. My best friend, who lived in the country and came in on the school bus, had a more kindly experience. She had piano lessons from Mrs Morrison, whose house was just across the road from the school. This meant that country children could have their lessons at lunchtime. So Mrs Morrison, not considered by the cognoscenti to be the best teacher, nevertheless had a following from this group.

We girls were most intrigued by Mrs Morrison’s son. He could be seen, pasty-faced and glum, walking along the road at any time of the day. Where did he work? Did he work? We didn’t know. A friend once saw him emerging from the billiard saloon in Union Street. We knew this to be a haven for the dissolute, and were shocked and very sorry for Mrs Morrison. It was a puzzle.

My first clue to the puzzle came when I reached my teens. My mother, with other mothers, organised a dance at the Bon Ton Tea Rooms (hired, arranged and decorated for the purpose) for their teenage children – an agonising experience for most. There was a proper dance band. On stage stood the leader, the rather ‘wild’ son of the well-regarded local undertaker, and, by his side, pasty-faced and glumly grasping his saxophone, stood Mrs Morrison’s son. What a revelation! He had a job after all! He was musical! I was so pleased for Mrs Morrison.

Years later, in London, a friend urged me to read a book which she claimed was about my birthplace. I looked at the cover. The scarecrow, by Ronald Hugh Morrieson. ‘Never heard of him,’ I said.loftily. ‘Must be a newcomer.’ But there it was – bodies at the undertaker’s, the billiard saloon, the pubs, the house with a turret on the corner opposite Mrs Morrison’s house. Hāwera Gothic? Amazing.

Mrs Morrison’s son! So this is what you were thinking about as, preoccupied and grim-looking, you trudged along South Road. Inside you were laughing!

Mrs Morrieson, I’m sorry I didn’t know how to spell your name. I hope you lived to know that your son put Hāwera on the map.