Pukearuhe and the White Cliffs (1 o 2) 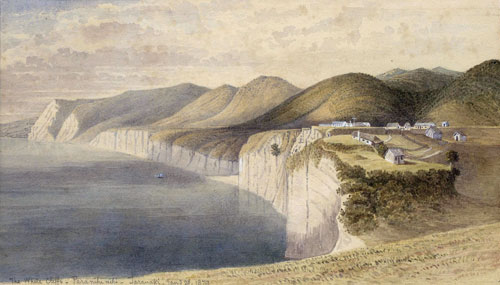 This 1879 watercolour of Pukearuhe and the White Cliffs shows the Armed Constabulary redoubt and the township of Clifton. For several hundred years Pukearuhe pā was a Ngāti Tama stronghold which protected the northern frontier of Taranaki. In 1865 the 70th Regiment and Taranaki Bushrangers occupied the area and built a redoubt and blockhouse. In 1869 the small garrison of three men, the commander’s family and the Reverend John Whiteley were killed in a Ngāti Maniapoto raid, after which the post was abandoned. It was reoccupied from 1872 until 1885 by Armed Constabulary under Captain William Messenger. Pukearuhe pā was returned to Ngāti Tama in 2003 as part of their Treaty of Waitangi settlement.

Michael Belgrave of Massey University gave a talk tonight (19 Nov 2015) at Soundings Theatre in Te Papa - a Massey alumni event in memory of NZ historian W.H. Oliver. Michael talked about the murder of the Gasgoigne family & the Rev. Whitely in 1869 - he forwarded it as a case study about the forces behind Maori & Pakeha encounters in the study of history, he put forward the view that historians need to be aware that they take on certain positions when discussing historical events - he emphasised the complexity of past events & how history can be presented in a simplistic manner without 'hearing' the conversations behind events. Tonight was interesting & stimulating for those present.