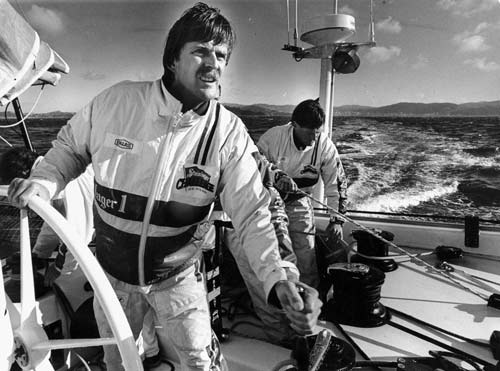 One of the heroes of New Zealand’s rise to international yachting success was Peter Blake. Born in 1948 in Auckland, he grew up at Bayswater on the Waitematā Harbour. He started sailing at the age of eight in a P-class dinghy, and as an engineering student built a 7-metre keeler in his parents’ garden. From 1973 he participated in the first five Whitbread Round the World races, finally achieving victory in Steinlager 2 in 1989. He also won a non-stop round-the-world race in the catamaran Enza in 1994. He then took charge of New Zealand’s America’s Cup campaign, which he led to victory in San Diego in 1995. In 2000 he led a successful defence of the cup. Knighted for his services to yachting, Peter Blake was killed by pirates at the mouth of the Amazon in 2001. This photograph was taken in 1988 on board Steinlager 1.