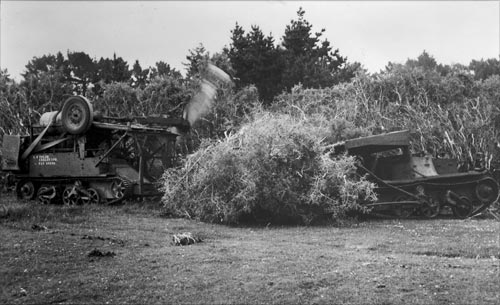 In the first half of the 20th century boxthorn hedges were trimmed by hand – if they were maintained at all. In 1941, Lou Butler, a Swiss-born Inglewood engineer, mounted a large revolving blade on a Fordson tractor to create Taranaki’s first mechanical hedge-cutter. Over the following decades, Butler and his sons developed more efficient hedge-cutters. Following their example, dozens of other home-built machines were produced as ingenious modifications of trucks, tractors, army tanks and Bren-gun carriers.