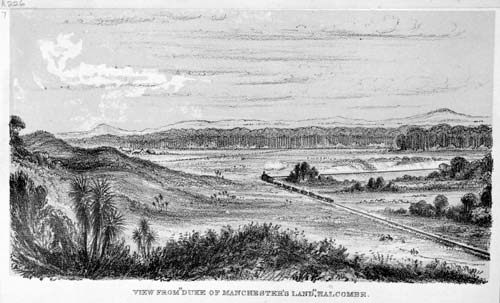 Artist Edith Stanway Halcombe lived at Feilding in the 1870s. Her husband Arthur Halcombe was agent for the settlement of the Manchester block between the Rangitīkei and the Ruahine ranges. In a report to the superintendent of Wellington province on 7 May 1874, Halcombe referred to an accompanying ‘series of sketches . . . made a week ago by Mrs Halcombe [that] show the progress that has been made in the settlement’. This view was probably drawn by her a few years later, when the railway was operational. It is taken from the township of Halcombe, which was laid out 15 kilometres north-west of Feilding.