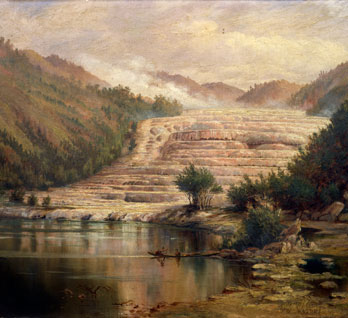 Volcanic forces created the dramatic landscapes of the Volcanic Plateau. Māori have long taken advantage of the lakes and geothermal areas, with their hot steam, bubbling pools and distinctive sulfur smell. Since the 19th century, tourists have been drawn to the thermal activity near Rotorua, trout fishing around Lake Taupō, and the volcanic peaks of Tongariro, Ngāuruhoe and Ruapehu.

The Volcanic Plateau stretches south-west from the Bay of Plenty coast to Mt Ruapehu in the central North Island. Rotorua and Taupō are the main towns.

The plateau is New Zealand’s main area of volcanic activity.

Māori arrived in the region from about 1300. They settled around the lakes and geothermal areas, where they could use the fresh water, hot pools and steam.

There are two main tribal groups:

Both are descended from the people who came to New Zealand on the Te Arawa canoe.

Non-native pine forests were planted from the early 20th century to provide timber, especially on the Kāingaroa plateau.

When Europeans first tried to farm the Volcanic Plateau, their animals became ill. Scientists found that ‘bush sickness’ was caused by a trace element missing from the soil. When fertiliser was added, farms could be developed.