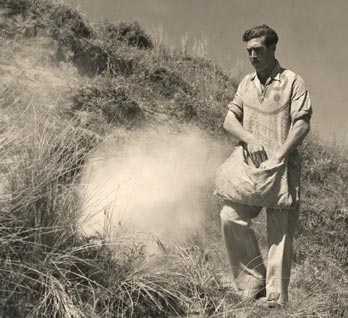 It was once slow, expensive and tiring to apply fertiliser on hill country – contract workers would cart heavy bags of fertiliser on horseback and spread it by hand. Fast forward to the 1940s, and the return home of World War Two fighter pilots. Criss-crossing the skies over remote farmland in adapted aircraft, they dropped superphosphate by the hopper load. Farming expanded, and the economy boomed.

There are two main ways to apply fertiliser to pasture (for cattle and sheep) or crops.

Why is fertiliser important in New Zealand?

The farmers who grow pasture and crops, and foresters who grow trees, want them to grow as fast as possible. To boost plant growth, they need to add fertiliser to the soil. The most common fertiliser in New Zealand is superphosphate.

Each year over 2 million tonnes of fertiliser are applied to pastures, crops and forests. Without it, the farming economy could not survive.

Once, horses pulled a spreader box, from which fertiliser spilled out onto the soil as the horse moved along. Later, tractors used machinery to throw the fertiliser out over a much wider area. This method is still used. Some farmers use a 4-wheel farm bike with a spreader behind it.

In the 1940s, when farmers were eager to find an easier way to apply fertiliser, air force pilots who had returned from the Second World War were keen to keep flying. As a result, engineers, agricultural scientists, pilots and others worked out how small aircraft could drop fertiliser from the air.

The first test flight was in 1948. The pilot flew a torpedo bomber fitted with a hopper and doors in the floor, through which the fertiliser was released. After improvements, this method became a great success: it was much quicker and cheaper, and soon farms around the country were using it – especially in remote hill country. By 1958 there were 73 topdressing companies.