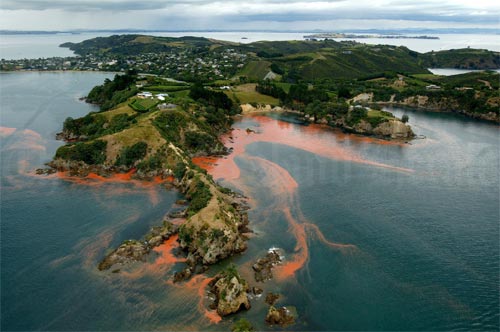 Marine algae range from large seaweeds to microscopic algae or microalgae that drift in the sea as part of the plankton. Sometimes there is a natural population explosion, or algal bloom. The algae may form dense patches referred to as a ‘red tide’, as many species contain red pigmentation. This can deplete the oxygen in the water, harming other marine life. Some species also produce highly toxic compounds. Most of the algae found around New Zealand occur naturally, but others may have been introduced from ships’ ballast water. This red algal bloom around Waiheke Island is Noctiluca scintellans, a native species that is not toxic.

Here is a recent upclose