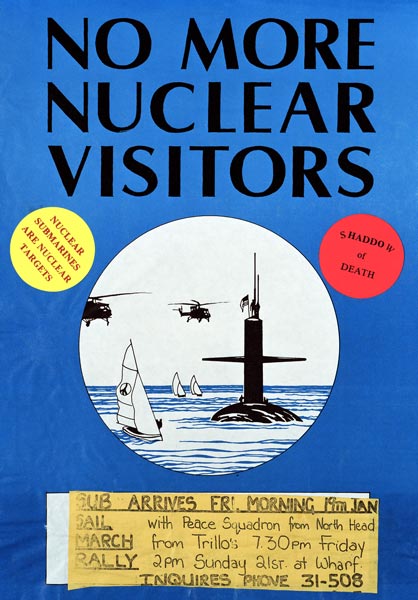 The Peace Squadron, a civilian naval blockade aiming to prevent nuclear-armed vessels from visiting New Zealand ports, was formed in 1975. The following year around 150 Peace Squadron vessels, including yachts, dinghies, canoes, kayaks and surfboards, confronted the US naval cruiser Longbeach on Auckland's Waitematā Harbour. They continued to protest when nuclear vessels visited New Zealand ports. This poster advertises a blockade, march and rally on the occasion of a visit to Auckland by a nuclear submarine in 1979.

I was living in Palmerston

I was living in Palmerston north at the time doing my bit to educate and inform the citizens of our city. Much of the Peace Squadron's activities were just on the edges of my consciousnes so it is very interesting to see this poster. Thanks Marilyn Woolford