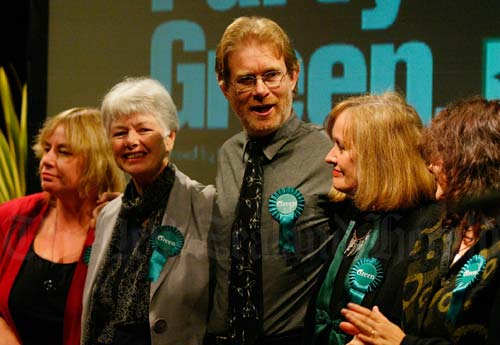 Green Party co-leaders Jeanette Fitzsimons (second from left) and Rod Donald (centre), stand with MPs Sue Bradford (far left) and Sue Kedgley (second from right), and list candidate Metiria Turei (far right) at the party’s campaign launch in August 2005. In November 2005, Rod Donald suddenly. A leader of the campaign for proportional representation between 1989 and 1993, he had become Greens co-leader in 1995. Leadership succession was being planned for, as Fitzsimons had made known her intention to retire, but there was no obvious successor to Donald as male co-leader of the party. Russel Norman, who had managed the Greens's election campaign in 2005, won the position.