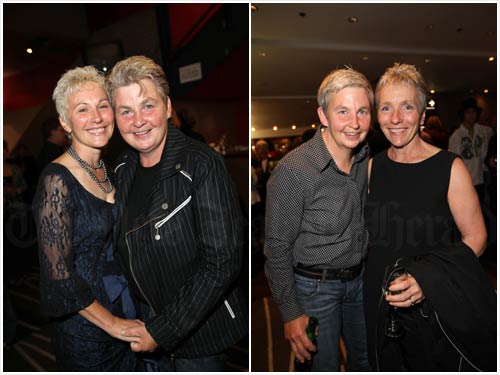 Lynda and Jools Topp were out as lesbians when they began their careers as entertainers in the early 1980s. The country-and-western comedy duo, now middle-aged, appeared with their partners at the premiere of the movie The Topp Twins: untouchable girls at the Sky City Centre in Auckland, in April 2009. Donna Luxton and Lynda Topp (left image) had been together for four years and lived in South Canterbury with Luxton's two sons. Jools Topp and Mary Massara (right) had a lifestyle block in West Auckland and had been partners for 16 years.

Lynda and Jools, thank you so

Lynda and Jools, thank you so much for a wonderful, entertaining evening at Newport Substation last night Although I have all your dvd's, seeing you both in person was a must not miss event I haven't laughed so much for years you are both such an inspiration to us all thank you and we look forward to seeing you when you return to Melbourne cheers Alison