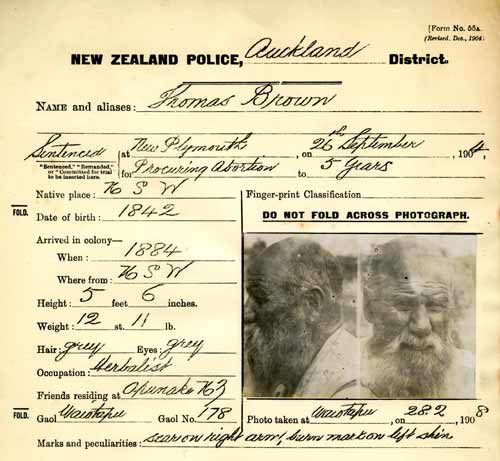 When young Edward Raven got ‘a girl into trouble’, he sought out abortionist Thomas Brown (whose police mugshot is shown here). Brown, who lived in Ōpunake, travelled to New Plymouth, where he met the young woman and Raven at a recreation ground at night. While Raven held the woman’s hand, Brown used ‘an instrument’ on her. In the process she was injured and probably hospitalised, so coming to the attention of police. In 1904 Brown was sentenced to five years jail with hard labour. Raven was sentenced to two years jail with hard labour, but his sentence was remitted (put aside) some hours after he was imprisoned.

Megan Cook, 'Abortion - Who and how', Te Ara - the Encyclopedia of New Zealand, http://www.TeAra.govt.nz/mi/photograph/29016/desperate-measures (accessed 14 August 2020)