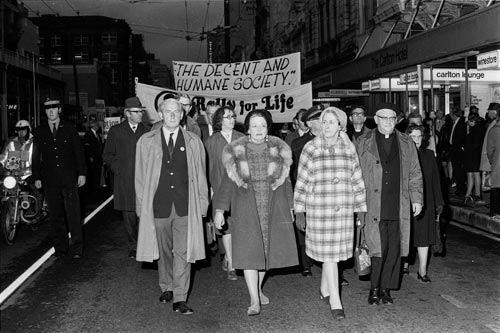 In the front row of an anti-abortion march in Wellington’s Willis Street in 1974 were the leaders of the New Zealand movement. Professor William Liley, Dr Diana Mason, Ruth Kirk and Archbishop Reginald Delargey (from left to right) represented the medical, political and religious establishments. Liley was a founder and first president of the Society for the Protection of the Unborn Child (SPUC). Mason was second president of SPUC and medical superintendent at the Alexandra Home for Unmarried Mothers. Kirk was married to Prime Minister Norman Kirk. Delargey was the leader of the Catholic Church in New Zealand.

Megan Cook, 'Abortion - Opposition and support from the 1960s', Te Ara - the Encyclopedia of New Zealand, http://www.TeAra.govt.nz/mi/photograph/29018/opposition-on-the-march (accessed 17 May 2022)