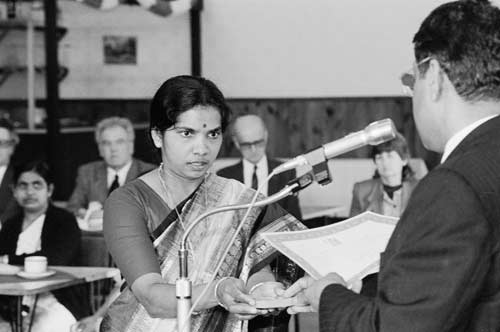 From 1977 until 1990 New Zealand’s poor economy drove far more people overseas than it attracted. Yet there were some significant newcomers, including Fiji Indians and Sri Lankans, both of whom emigrated to avoid political difficulties in their home countries. This Sri Lankan woman, Pathmasini Rajasingham, is receiving her certificate of New Zealand citizenship from the minister of internal affairs, Graeme Lee. She had arrived in New Zealand five years earlier.