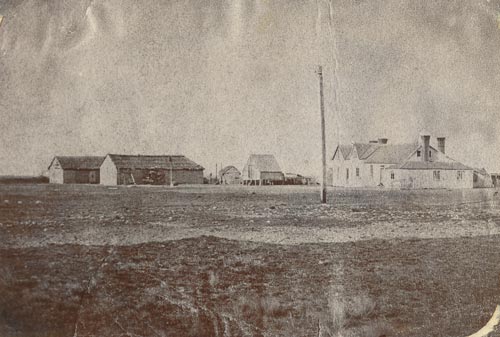 Accommodation houses like William Turton’s Ashburton Arms on the Canterbury Plains were an important form of shelter for 19th century travellers, who otherwise had to sleep outdoors or rely on the hospitality of homesteads along their route. Accommodation was not always as quiet as this scene – houses provided liquor as well as shelter, and quickly filled up, as this extract from George Chamier’s 1891 novel Philosopher Dick shows:

The third day brought the travellers to the first accommodation-house on the road. It was a large one-storied wooden building, bare and unsightly, and standing by itself on a wide reach of arid plains. It comprised an open bar, a capacious public room, and a number of sleeping apartments, all naked and dismal in their furnishings, but provided with as many stretcher beds as could be crammed into them. The kitchen and some little outhouses stood a short way off at the back.

Even from a distance it became evident that the place was fully occupied. Several drays were drawn up in front of the house, the stock-yard close by was full of bullocks, and several horses were tied up to the verandah posts. A gang of shearers could be noticed staggering about the premises, while the squeaking sound of a German concertina, the shuffling of feet, and a loud hubbub of voices greeted the travellers on their approach.

"We are in for a wet night," said Long Bill, with a knowing glance at the scene.

"It looks like it," replied Raleigh, as he watched the dark clouds gathering at the horizon.