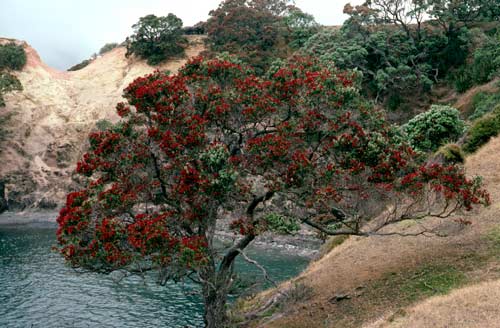 Pōhutukawa is known as the New Zealand Christmas tree, as it flowers in this festive period. It originally grew in coastal forest in the northern half of the North Island. Within its natural range, pōhutukawa is considered to be in serious decline. Much of its habitat was destroyed by Māori and European settlers, and possums have ravaged surviving stands. In 1989 Project Crimson was launched in an effort to conserve and restore its populations in northern New Zealand.

Pōhutukawa has been widely planted beyond its natural limits. It freely regenerates in frost-free areas in the southern half of the North Island and the northern tip of the South Island. It often becomes a pest plant, invading native shrublands and forming hybrids with nearby rātā trees.