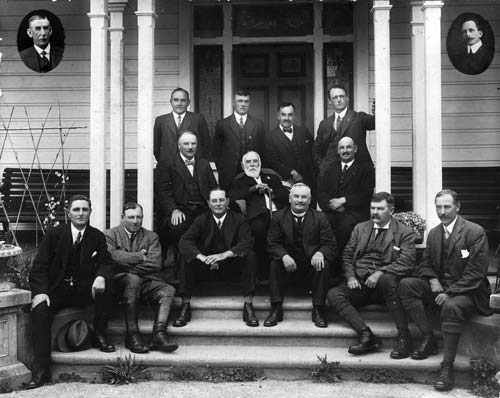 Managers and directors of the Wairarapa Farmers’ Co-operative Association pose on the doorstep of Myer Caselberg’s Masterton house, around 1920. Caselberg – seated at centre, with white beard – was one of Wairarapa’s most successful merchants. Born in Poland, he came to New Zealand in 1863, opening a store in Featherston in 1865. This was followed by stores in Greytown and Masterton. In 1892, with his friend Joseph Nathan, he formed the cooperative association. It had a share capital of £100,000 and sold everything from butter to cars. By 1908 it was the largest inland business in the North Island, with stores from Wellington to southern Hawke’s Bay.