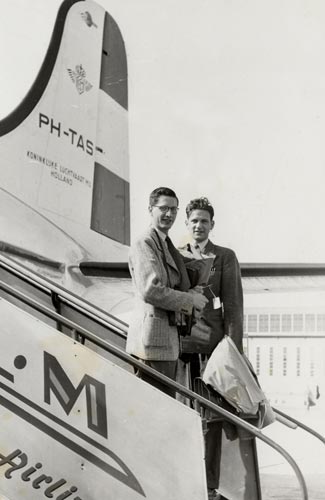 Brothers Dirk and Jan Rinckes farewell their relatives in the Netherlands as they board a KLM aircraft bound for New Zealand. Their flight, on 6 July 1952, was a preliminary to the London to Christchurch Centennial Air Race in 1953. They arrived in New Zealand, days later than scheduled, to much fanfare and speech-making by New Zealand and Dutch government officials.

After having obtained the necessary entry permit from the New Zealand authorities in The Hague, we had to decide by what means we were to travel to the Antipodes. The accepted mode of transport was by ship – the Van Oldenbarneveld, the Sibajac etc., names familiar to many Dutch immigrants. The reasons are now lost in the mists of time, but it was decided that we were to travel by air. KLM had flown emigrants to Auckland before, but was planning its first flight to Christchurch as a preliminary to the London to Christchurch Centennial Air Race in 1953.

As both Jan and I were planning to settle in the South Island this flight seemed to answer to our needs. So on the morning of 6 July 1952, accompanied by our parents, sister and a number of relatives, we arrived at Schiphol airport. After emotional farewells and the required formalities completed we boarded PH-TAS Schiedam, a four-engine propeller Skymaster, with 57 other unassisted immigrants.

The facilities on board appeared to us quite luxurious: the only earlier experience for me was a DC 3 some years previously.

The first stop for refuelling was to be Rome where the new airport greatly impressed us. The next stopover was Cairo: just at the time of the revolt against King Farouk. As a treat we were taken on a bus tour through the city and on to the pyramids. All the roads were lined by police armed with long sticks.

It was then off to Calcutta. Most of this flight was to be during the hours of darkness; a most impressive sight was the gas flares above oil wells as far as the eye could see. At some stage I noticed that the moon was on the other side of the cabin and on enquiring, the cabin staff told us that one of the engines had cut out and we were diverted to an American base. After ditching most of our fuel, we landed at Dhahran on the Arabian Gulf on three engines in the early hours, with emergency service vehicles accompanying us down the runway. A greatly relieved body of passengers gave the flight crew some well-deserved applause for the safe landing.

Here we stayed for several hours for running repairs, cooped up in a very small station building with chilled tomato juice the only refreshment available. (It was several years before I could face any tomato products again.) Eventually we left for Karachi for more permanent repairs.

Because of the delay all our hotel bookings had been cancelled and improvised bookings at short notice had to be arranged by the airline along the route to New Zealand. After Karachi we went on to Calcutta and Bangkok where we stayed again overnight. Then it was on to Singapore for another interesting night in the tropics. At the hotel we met a Dutchman who had spent several years in these parts and who had difficulty speaking his mother tongue, something we found difficult to understand then. Now we can understand how this is possible for somebody after several years away from Home.

The next stop was to be Jakarta for refuelling. Here we were treated with a certain amount of officiousness: we were confined to a small area without any chance of leaving the airport for a little sightseeing.

On re-entering the aircraft we were advised that our flight to Port Darwin was going to take considerably longer as the Indonesian authorities had imposed a large no-fly zone over the direct route to Port Darwin, sorely stretching our fuel supplies.

We arrived at Port Darwin after dark and hotel accommodation was at a premium. Some of us were accommodated in already occupied rooms, which caused a great deal of hilarity among the mostly young single women in our party. I remember our surprise at being served a hearty breakfast of eggs, sausages and chops, a far cry from the continental breakfasts we were used to. It was to be a long flight to Sydney, with the unnerving experience of a severe electrical storm. The sight of Sydney from the air at night was again some thing we shall never forget. During several passes over the urban area on descent, we were impressed by the size of the place with all the lights. We visualised it with the compact Dutch cities in mind, and in the morning we were surprised when we saw that the housing was much more open than in the crowded cities at Home.

We had lost a good deal of time during our delays and were looking forward to our arrival at New Zealand the following day, but to our great disappointment we were informed by telegram from New Zealand to spend an extra day in Sydney, as facilities for further internal travel to the North Island would be too stretched if we were to arrive on the Sunday.

KLM looked after us during the weekend and organised several trips. We went to Bondi and walked across the Harbour Bridge.

After a short flight we arrived at Harewood on a beautiful clear afternoon on 14 July 1952. Our arrival was seen by the authorities as an epoch-making event: there were local and central government dignitaries, Dutch government representatives and visitors to welcome us with many speeches.

Some of us remained in Christchurch; most of the 24 single women joined their fiancées in the North Island and I was to travel on to Invercargill. All our travel arrangements had to be remade and in the meantime we were offered accommodation at the Tasman Hostel in Lyttelton.

I stayed until the Wednesday when PH-TAS left on its return flight to Schiphol. This was my last tie with my home country: the wireless operator had lived with us for several years and his departure filled me with a degree of sadness.

Jan has stayed in Christchurch to this day, while I boarded a NAC DC 3 for Dunedin. There I changed to a still smaller Dominie for the last leg of my journey – to Invercargill – to start a new life.