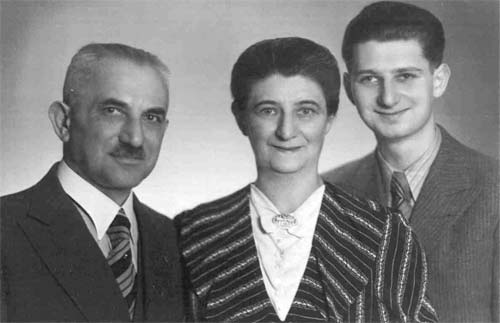 In the late 1930s Jewish refugees from Hitler’s Germany were particularly keen to migrate to New Zealand. However, New Zealand restricted their entry and only 1,100 actually arrived. One who did was Hans Johnson, pictured with his parents before leaving for New Zealand in 1938. Here, he tells his story.

Below is the story of how my father, Hans Johnson (Jottkowitz was the original name) came to New Zealand as a German Jewish refugee in December 1938. Hans Johnson wrote it in the last few months of his life as a contribution towards a Jewish holocaust feature for our synagogue newsletter. Hans Johnson died on 17 March 2002, aged 83.

It was Friday 10 November 1938 when I made my way to the London hotel to join fellow Jews to travel by sea to Canada, overland and then to New Zealand and Australia.

Posters of the afternoon papers shouted, ‘Synagogues burning’ and ‘Pogrom in progress’. Thus started my emigration to New Zealand. It had begun in Berlin about Pesach (Passover) when my entry permit to New Zealand had arrived. Full of joy, my parents and I set out to book a passage in perhaps a couple of months’ time, but after going from shipping office to shipping office, it was plain that November would be the earliest booking with Canadian Pacific Railways.

Suddenly, in September, Hitler decided to liberate the Sudeten Germans in Czechoslovakia and for several weeks it looked very much like war. In order to get a transit visa for England for me, my parents decided to pay for my ticket there and then, but Canadian Pacific refused to accept the payment. By the end of September with the Munich conference and the agreement that the Sudetenland would be handed over to Germany, the threat of war was removed.

Then, at the beginning of October, it was decreed that all passports issued to Jews must be endorsed with a ‘J’. To get this stamp, one had to go from office to office, queue and produce documents endlessly, until after many days the passport was duly stamped.

A fortnight before my intended departure, a postcard arrived out of the blue, requiring me to come, plus passport, to a Gestapo office at police headquarters. I was signed in before being allowed to pass through the iron grille guarding the passageway leading to the offices. When I handed my passport to the Gestapo officer, he immediately barked at me, ‘That’s invalid’. I replied, ‘No it has the J stamp’. He became quite friendly, discussing foreign countries I had visited. I left Germany as planned on Sunday 5 November 1938, by air for London, thus dodging possible harassment by the Nazis at the German–Dutch border.

It was a dreary departure from Liverpool. Within a day or two we discovered there were 200 of us on board, 180 for Australia and 20 for New Zealand. As this was an unpopular November crossing, there were few other passengers. Nevertheless this was our first taste of English shipboard life – screenings of films we could scarcely follow, housie sessions and so on. The ship’s daily news chronicled continued outrages in Germany which depressed us more and more.

When we docked at Quebec, the media became aware that a boat with a large contingent of Jews bound for Australia and New Zealand had arrived. We were met by reporters from papers and radio stations, all wanted interviews which we didn’t want to give because most of us had left relative behind.

As our train travelled across Canada, there were crowds of well-wishers at each stop. Russian Jews who had come to Canada at the beginning of the century drove for hundreds of miles through the snow and ice to meet the train. We were awakened in the middle of the night to shake hands and accept gifts. For three days and nights we were news.

Leaving Vancouver was very different from leaving Liverpool. This was the Christmas sailing of the Aorangi for New Zealand, full of tourists returning home. Although we still kept together, we were absorbed into the shipboard life. We docked at Auckland on a Sunday evening in December to be met by Rabbi Astor and members of the Jewish community. I boarded a train for Wellington, where waiting for me on the station was Hedi Ruben, my cousin Margot Hirsh and her small sons.

From her I learnt that my father, like so many others, had been put into a concentration camp. My mother visited that same Gestapo office I had been to earlier to plead for his release but had been unsuccessful. I tried to get an entry permit for my parents but again had no success. This meant they had to endure forced labour in Berlin, deportation to Theresienstadt and finally death in Auschwitz in what we thought was December 1944.

We later learnt that it was October, not December that my parents had died. But for some years, although December was the anniversary of the beginning of my new life in New Zealand, ironically I also remembered it as the month of the yahrzeit of my parents.