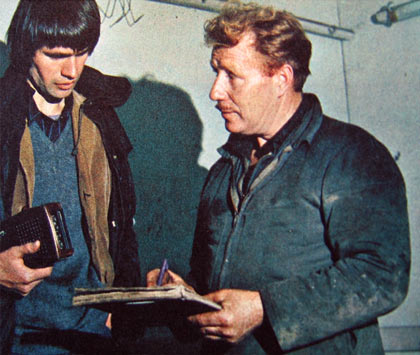 J. W. H. (Red) Duncan has worked in forestry and coal mining on the West Coast for over 60 years. In recent years he has been very involved in community affairs, including the Mines Rescue Service, the board of Solid Energy and the Buller Electric Power Trust.

When I left school I got a job in the New Zealand Forest Service (NZFS) at Ohakune. I learnt surveying there, which meant that you had to draw your own plans, count and measure trees, and work out the amount of timber. Although I started as a labourer, for a while I was the youngest ranger in the NZFS.

In 1949 I was sent to South Westland to take charge of part of the national forest survey. We were trying to work out how much timber there was, as well as drawing the boundary between protection and production forest. We traversed along lines a mile apart, measuring and recording the trees. We worked in groups of three, assisted by university students over the summer vacation. Over several years we surveyed a huge part of the West Coast, between the Karangarua and Buller rivers. We had to cross lots of rivers, but I never learnt to swim. We just picked the crossing places carefully, and made sure that our packs would float if we got washed away.

About that time I met Tom Moynihan, a Westport engineer interested in coal mining. He heard that I could do surveying, and offered me a job at twice what I was getting from the Forest Service. I studied part time to get my mining qualifications from the Westport School of Mines. Tom Moynihan was interested in hydro-mining (using water to extract the coal), and we used this method in a number of different mines. When I became manager of the Charming Creek mine we devised a system to lift the coal 30 metres to the surface using a balanced column of water, leading to a big reduction in costs. It was also a much safer way of working, as there was no coal dust around.

For a hobby I developed my own opencast coal mine on a plateau near New Creek, north-east of Īnangahua. I discovered the coal when I was surveying the forest, and the mine has been producing for over 30 years.

On my first visit to Westport I met Colleen Wilkinson, a very attractive young lady in the Forest Service office, and we have been married for 51 years. We have lived on the West Coast all that time, so I’m an adopted West Coaster. It’s a great place to live and bring up a family – a real land of challenge and opportunity.

‘The caviar of coals’