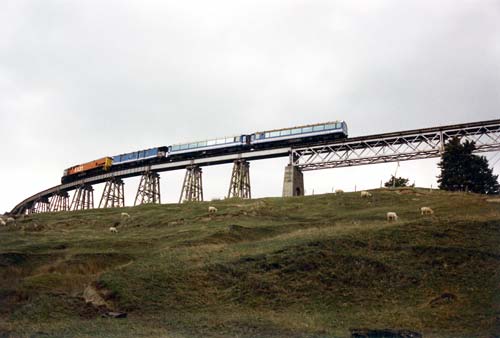 As the train was almost on the curved part of the Ormondville viaduct, doing 10–12 kilometres per hour, the locomotive started to feel as though it had derailed. As I started to apply the brakes, the locomotive swayed from side to side. I realised that it was not a derailment, but an earthquake.

I put the brake handle into the emergency position and the train stopped. It was straddling the wooden and steel parts of the viaduct. I sat there with a feeling of amazement and terror, as the locomotive bucked up and down, and swayed from side to side. The entire viaduct in front of me did the same.

When the shaking had stopped and I had recovered my composure, I told the train manager that we would not go back across the viaduct until we had checked the train, the track and made a visual inspection of the viaduct. I suggested that he should walk the passengers back to ‘solid?’ ground, as I was not prepared to move the train with passengers in case the viaduct was damaged.

Then a further earthquake struck us again. When it stopped, the train operator and I helped the train manager and hostesses get the passengers off the train and off the viaduct.

We checked the viaduct, the train and the track. We saw that the ballast had moved from the north abutment, and with no passengers on the train we reversed it very slowly off the viaduct.

When we were off the viaduct, we picked up the passengers and reversed back cautiously, to road access and a track telephone. We talked to the passengers until buses arrived. The Ormondville Fire Brigade helped us and provided portable lighting. We eventually arrived back at Palmerston North at 9 p.m.