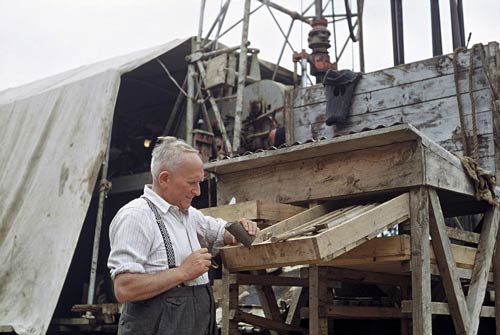 Alfred Steiner logs cores on a drilling rig at Wairākei.

Alfred Steiner (1901–1980) studied geology and mining engineering at the University of Ostrava, Czechoslovakia, and gained experience in coal mining. He emigrated to New Zealand with his family in 1939, a few days before the outbreak of the Second World War. It proved impossible to gain employment as a geologist or mining engineer, and he worked for several years as an electrician.

1n 1947 the New Zealand Geological Survey was actively recruiting geologists, and he was offered a position as a petrologist (studying the microscopic features of rocks). For the next 30 years he studied many hundreds of core samples from holes drilled for geothermal exploration. It was painstaking work – few other people at that time wished to work on fine-grained, hydrothermally altered rocks, which were difficult to observe under the microscope. He gained an international reputation for his work on the Wairākei geothermal field, especially for understanding the changing mineralogy with depth and hydrothermal alteration. A highlight was his discovery of the zeolite mineral wairakite, which has since been found in geothermal areas worldwide.