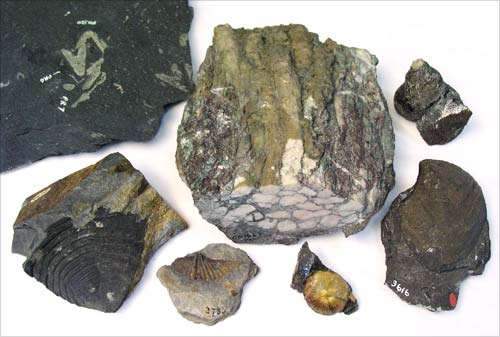 Clockwise from top left: graptolites, coral, a snail, a bivalve mollusc, another coral, a brachiopod and a trilobite. It was during 10 million years of the Cambrian period of the Paleozoic era, known as the Cambrian explosion (530–520 million years ago) that the basic body forms of the major animal phyla that exist today were established. While graptolites and trilobites are long extinct, snail, coral, brachiopod and bivalve mollusc species are still with us.

These fossils are part of the GNS Science National Paleontological Collection.