Crater left by the ‘rogue bore’ 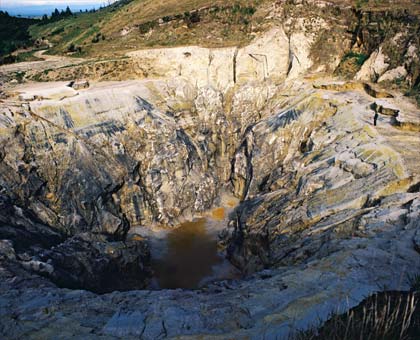 In 1960, drillers prospecting a new part of the Wairākei field got more than they bargained for when steam forced its way up the outside of the bore casing and exploded at the surface. It sent up a plume of steam visible 120 kilometres away, and created a crater 22 metres deep and 70 metres long. Crews tried to seal the hole by pouring in vast quantities of thick mud and cement, but water continued to erupt and the crater got bigger. Over several months it swallowed up the original drilling platform, part of the access road and some of the hillside. Attempts to contain the ‘rogue bore’, as it became known, were eventually abandoned, and it became a tourist attraction. A Rotorua-based journalist, Ross Annabell, dodged a series of locked gates and warning signs to visit it, as he described in Hot water country (1962):

‘Below us was a small steaming lake about 90 m wide, set in a sort of crater about 15 m deep, with earth walls which shook visibly under the continuous impact of some hammer-like subterranean force… in the crater bottom a furious, steaming, boiling lake of dark grey murky water was in violent motion, stirred by almost continuous steam eruptions. The pressures built up every two or three minutes to a furious geyser eruption which hurled a column of dark muddy water nine to 15 metres into the air, with an accompanying column of steam which shot more than 90 m above the hilltop … it was horrifying, yet utterly fascinating. We felt like running, yet our legs remained immobilised by mixed fright and curiosity. It was far more than a tourist spectacle; it was a feel, a pulsating, horrifying feel that reverberated through the very soles of our feet.

‘Overseas visitors who saw the bore declared it was the highlight of their visit to New Zealand.’

The rogue bore died down of its own accord in 1975, and the photograph shows the crater left behind. The person at upper right gives a sense of scale.

I first witnessed this as a 6

I first witnessed this as a 6 or 7 year old the evening following the blowout. We parked in Poihipi Road, climbed over the fence and walked the short distance over the farmland to the ridge at the top of the paddock. The drilling rig was lit up and sitting on the pumice access road beside the crater. Some of our friends and neighbours were there also. I saw a crater perhaps 10 - 15 feet in diameter from which a "solid" column of steam shot straight up. The noise was immense - we could hear it and see the column of steam day and night for months from our home in Taupo. We visited it at least twice while it was in this initial state. We used to go mushrooming in the adjacent paddocks. Months later the roar had subsided. The official description of the roiling mud-filled crater is well-described above. Every 10 seconds or so you could hear and feel hammer-blows below the ground which would then shake like jelly for several seconds before a jet of mud shot up in the air from the crater. The hammer-blows would no doubt be the superheated water below flashing to steam as the pressure was periodically released. In 1983 around Christmas when the crater had been dead for a few years I visited the bore for the last time. After checking the solidity (or otherwise) of the crater floor by tossing several rocks in I climbed down into the crater but NOT across - it sounded pretty hollow - as a last personal farewell to one of the most memorable events I have ever witnessed. There were plants growing in the crater wall along with several small pines. I have used similar sounding techniques when judging the safety of accessing many of the thermal areas in the region including the (then bare) ground at the Craters of the Moon (then known as the Karapiti blowholes.