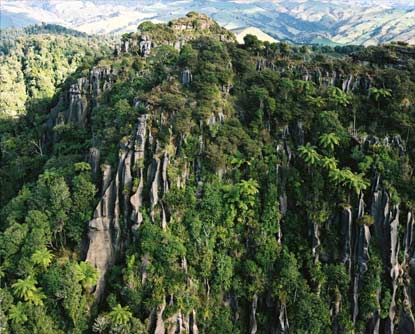 Limestone is slightly soluble in water. Over millions of years it is dissolved by rain, which has absorbed carbon dioxide from the atmosphere, forming a very weak acid. This results in strange outcrops known as karst. The cliffs at Waitomo in the King Country show a distinct weathering pattern, or fluting, caused by surface water slowly dissolving the rock into little valleys. This type of outcrop is also prominent in the Tākaka valley on the road to Golden Bay, near Nelson.