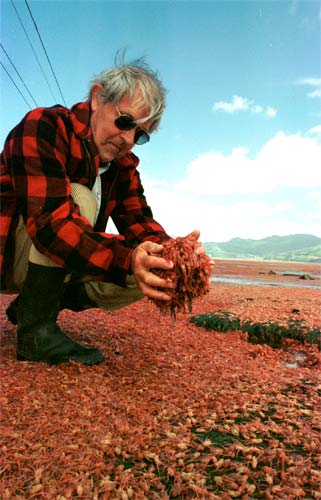 Otago Peninsula local, Lloyd Algie, is shown here scooping up a handful of red krill that was washed ashore in January 1998. Krill are types of crustaceans – a group of animals that includes crabs and crayfish. Some krill live in surface waters all their life, but the species shown here, Munida gregaria (the squat lobster), only lives there when young. The adults live on the sea floor. In summer, large swarms of red krill often appear around the east coast of the South Island. At such times, they provide ample food for fish, seabirds and marine mammals.

A swarm of zooplankton