From Dalmatians to Croatians 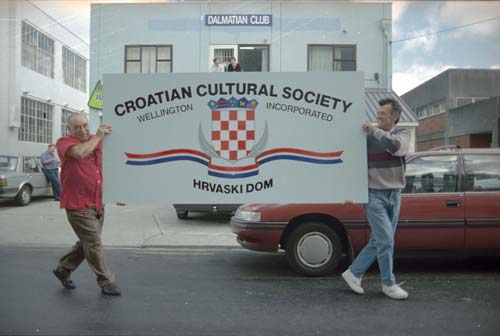 Croatian Culture Society president Marijan Koskovic (left) and secretary Drago Krzanic display their new sign while other club members watch from beneath their club’s old sign. The Wellington club started as the Yugo-Slav Club in 1938 and retained that name for 55 years. In the early 1990s, when war tore Yugoslavia apart, the name was changed to the Dalmatian Club as most members were from Dalmatia. In 1996 a decision was made to change the name to the Croatian Culture Society. Croatia declared itself independent of the former Yugoslavia in 1991.

A story by Amelia Batistich