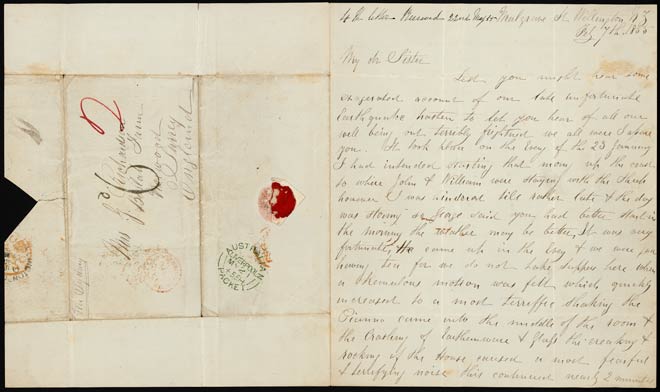 The transcript below is from this letter written by George Moore to his sister in England, giving an account of the Wellington earthquake of 23 January 1855.

Lest you might hear some exaggerated accounts of our late unfortunate earthquake I hasten to let you hear of all our well being but terribly frightened we all were I assure you. It took place on the evening of the 23 January. I had intended starting that morning up the coast to where John and William were staying with the sheep. However, I was hindered. … It was very fortunate that he [George] came up in the evening and we were just having tea for we do not take supper here, when a tremulous motion was felt which quickly increased to a most terrific shaking. The piano came into the middle of the room and the crashing of earthenware and glass, the creaking and rocking of the house caused a most fearful and terrifying noise – this continued nearly two minutes. You could not stand without holding and the shock had passed before we could get Syd and Nell into the garden. George, Fred and Margaret were asleep. We got them out and set up a tent where we sat till daylight but continued to sleep and live out of doors for more than a week as the shocks continued and still continued tho’ they are now very slight and we scarcely notice them. It is little short of a miracle that only one fatal accident occurred. The fall of (with but one or two exceptions) all the chimneys and many brick walls and partitions into the streets and houses and only one person killed, is indeed a more striking mark of the merciful care of our Almighty Father. … Our house was quite uninjured except the chimneys and we were obliged to make our fire in the garden. Many who had not a yard or garden did so in the street. George’s house being partly brick built suffered a good deal but he is fast getting it to rights. I was as you may judge very anxious to hear from John and Wm the more so, as about 30? miles up the coast the sea suddenly rose and washed everything away, houses, boats and bales of wool waiting to be shipped but there again more miraculously no lives were lost. I have a letter from John, he was that night at a station near where the sheep are and is quite well and the sheep are alright. Indeed I think they are the only description of property that is not very seriously depreciated but the old hands say ‘Oh, it will soon be forgotten’. I seem to doubt this. The town the next morning presented most melancholy appearance. The building most injured was the Bank a very nice brick and stone one it cost between [?] and 8000 pounds and was scarcely completed. It is now a perfect wreck plainly telling us that wooden houses are only proper to be erected here. I trust we may never witness the like tho they appear to come at intervals of 7 or 8 years, 1840, 48 & 55 have been the dates of them since the place has been colonized. It must much retard the progress of the place in spite of its beautiful climate.