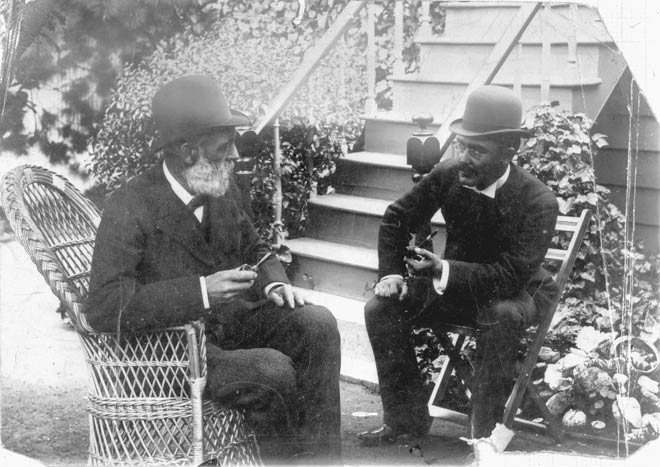 Author Rudyard Kipling visited New Zealand at the age of 24 in 1891. This image shows him (right) in conversation, probably with William A. Ewing in his garden in Elm Row, Dunedin. Kipling was in New Zealand for only a month but he wrote a short story about it, described Auckland as 'last, loneliest, loveliest, exquisite, apart', decided that the Fiordland sounds were one of the wonders of the world, and considered that New Zealanders told so many tall tales that they were way up there with respect to 'yarn power'.

Re: the photo of Rudyard

Re: the photo of Rudyard Kipling in Dunedin. Kipling’s companion is definitely, rather than ‘probably’, William A Ewing. The photo was taken in the garden of William Ewing’s house in Elm Row in Dunedin. William Ewing was my great-grandfather. My father had a letter from Kipling to William Ewing, and a copy of this same photo. It was passed to my brother, who donated letter and photo to the Hocken Library in Dunedin. Mary Stuart Stephenson, who donated this copy to the Turnbull, was my aunt. Robert Ewing, who took the photo, was my father’s uncle. I have a number of other photos of William Ewing in family archives. There is also a photograph in the Early Settlers Museum in Dunedin.