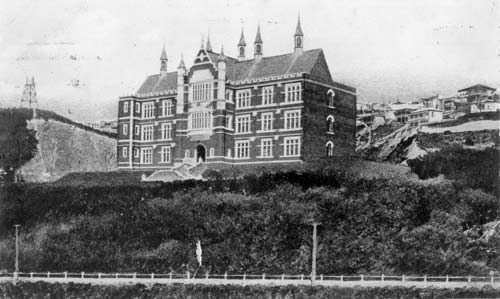 Victoria University of Wellington's Hunter Building is the university's most prominent and well-recognised building. Construction of the Hunter Building commenced in 1904, whent the institution was Victoria University College, and was officially opened in 1906. As this photograph from 1908 shows, it cut a rather lonely figure on the barren hill in its early years. The Hunter Building was declared an earthquake risk in 1974 and would have been demolished but for a group of university alumni who formed the Friends of Hunter Society. Their lobbying resulted in its retention and it was earthquake-strengthened and refurbished.