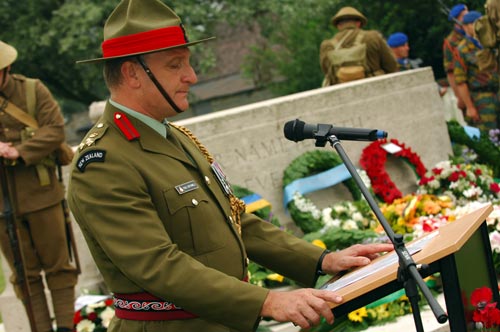 Brigadier Paul Southwell, New Zealand defence attaché in London, speaks in Messines, Belgium, at a June 2007 ceremony marking the 90th anniversary of the Battle of Messines in the First World War. The New Zealand Division took part in the battle, suffering 3,700 casualties. New Zealand defence attachés are military officers based at overseas diplomatic posts to liaise with the host country's defence interests. They cooperate with New Zealand's Ministry of Foreign Affairs and Trade to reinforce the activities of the diplomatic corps.