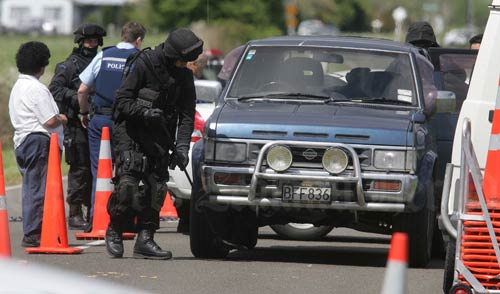 On 15 October 2007 armed police arrested 17 political activists in locations throughout the North Island. The small Tūhoe community of Rūātoki was completely closed off by police during the raids. Police claimed those arrested were involved in a terrorist training camp in the Urewera mountains. In total 14 people faced charges after the raids. The solicitor general (head of the Crown Law Office) turned down police requests to allow the defendants to be charged under the Terrorism Suppression Act 2002. One defendant, Tuhoe Frances Lambert, died while still awaiting trial. In September 2011 charges were dropped against all but four of the remaining defendants. In March 2012 the 'Urewera Four' were convicted on weapons charges. Tame Iti and Rangi Kemara were both sentenced to two and a half years prison in May 2012. The case was controversial throughout, with some members of the public claiming that police used the fear of terrorism to suppress genuine political dissent.