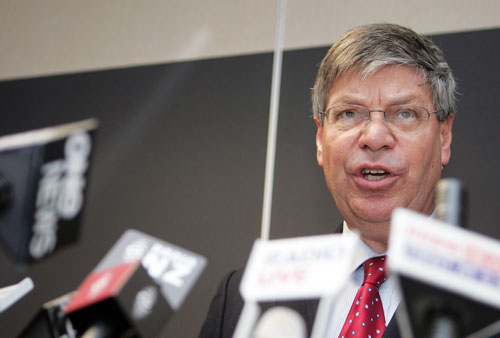 In December 2002 Ahmed Zaoui arrived in New Zealand on a false passport and asked for refugee status. Zaoui, an Algerian academic, stood as a candidate for the FIS (Islamic Salvation Front) in the 1991 Algerian election. He fled Algeria following a military coup. In New Zealand Zaoui was detained on the recommendation of the Security Intelligence Service (SIS). The SIS would not reveal the full details behind the security risk certificate they issued on Zaoui. He had convictions in France and Belgium, while information from European security agencies convinced the SIS that he was a risk. In contrast, the Refugee Status Appeals Authority, in August 2003, recognised him as a genuine refugee. Zaoui was released from prison after two years but fought a long battle through the courts for the right to stay in New Zealand. This September 2007 photograph shows Warren Tucker, director of the SIS, announcing that Zaoui's security risk certificate had been withdrawn. The SIS considered that changed circumstances and new information indicated that Zaoui was no longer a security threat.