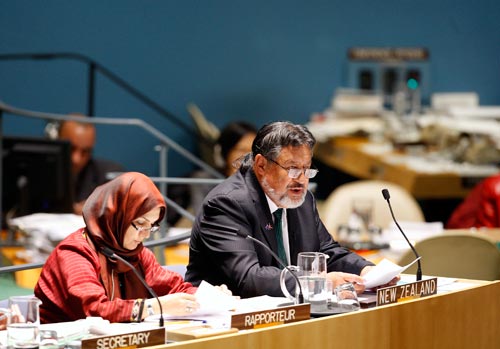 Pita Sharples, New Zealand's minister of Māori affairs (right), spoke at the United Nations Forum on Indigenous Issues in 2010, telling it that the New Zealand government would reverse its earlier decision and support the Declaration on the Rights of Indigenous Peoples. New Zealand had been one of three countries that refused to support the declaration (the others were Canada and the United States). The previous Labour-led government believed the declaration was incompatible with New Zealand's constitutional and legal arrangements and Treaty of Waitangi settlement policy. Acceptance of the declaration had taken a year's negotiation between the Māori and National parties, governing in coalition in 2010.