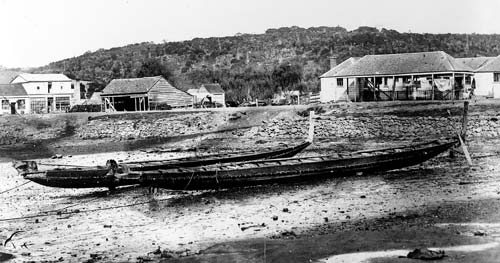 Pākehā prejudice meant Māori had difficulty finding accommodation while visiting towns and cities. Governments sought to overcome this problem by building 'native hostelries' in main centres where visiting Māori could stay for free, as long as they obeyed hostel rules. This is the Auckland hostel (right) in Mechanics Bay, about 1860. The building featured a covered area at the front where visiting Māori traders could display produce and wares. Waka (Māori canoes) are beached in the foreground.