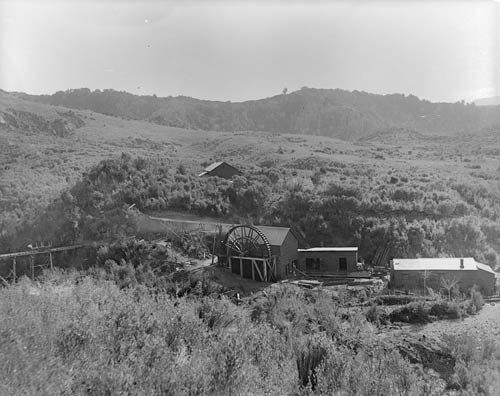 A 10-metre-high waterwheel drove a battery of six heavy stampers and four berdans (grinding pans), which crushed iron ore into powder at the Parapara paintworks in Golden Bay. Water came from the Glengyle Stream, several kilometres away in the hills, by way of a race. Māori had earlier used the Parapara iron ore deposits to paint their carvings and bodies. In the early 1870s T. B. Louisson and Daniel Johnston began manufacturing paint in Nelson, shipping in iron ore from Parapara to use as the pigment. They sold up in 1879 to the New Zealand Paint Company, which employed William Washbourn to design, engineer and install the crushing plant at Parapara. The company sold the plant to Washbourn and his brother in the 1880s. The Washbourns expanded and improved the operation, manufacturing two shades of reddish-brown paint. The New Zealand Railways Department was their main customer, using the paint on goods sheds and wagons. Hundreds of woolsheds and other buildings were painted with the brighter hue. The brothers sold up in 1906 to a syndicate who planned to develop the iron deposits for making steel. By 1922 the paint works were still useable but no longer operating.