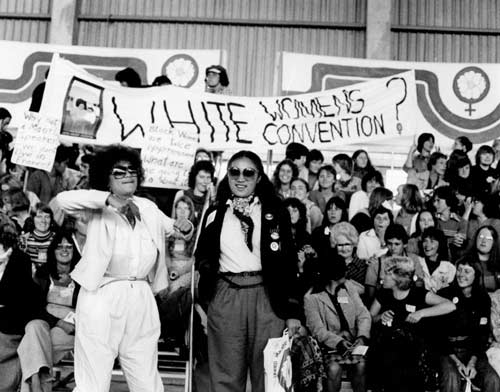 Māori and Pacific women issued a challenge to the women's movement at the United Women's Convention in 1979. Donna Awatere (left) and Mona Papali'i (right) accused the movement of racism, arguing that Pākehā feminists ignored the issues most important to Māori women. When the first National Black Women's Hui was held the following year, over 70 women attended. The black women's movement discussed racism, health, imprisonment rates, black–white relationships, assertiveness, class and sexism. Jan Smith from the group Black Dykes commented that 'being a black woman requires you to have a split personality. The Women's Liberation Movement is racist, the anti-racist movement is sexist and the socialist movement is both sexist and racist. This leaves black women out on a limb.'

Among Pākehā feminists, the response to this challenge to racism was volcanic, with pages of Broadsheet (New Zealand's women's liberation magazine) filled with letters in support or opposition. The charge of racism was taken seriously; some groups and organisations put in place Treaty of Waitangi training and restructured to share decision-making power and funding with Māori. Within Broadsheet reporting of Māori activism increased, and the collective published Donna Awatere's Maori sovereignty in 1984.

Women being served in a men-only bar