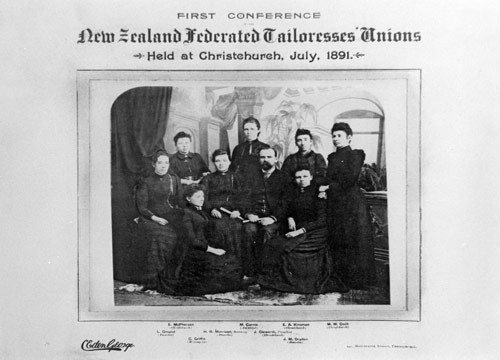 The Federated Tailoresses’ Union’s first conference was held in Christchurch in 1891. The president was J. Cleworth (centre). To his left is secretary Harriet Morison. Morison was a staunch feminist, and under her guidance the union became involved in the suffrage movement. On one occasion Morison described herself as the ‘mouthpiece’ of a large group of working women who ‘earnestly desired the franchise to be extended to them, because they felt the need of it. There were many reforms wanted amongst working women, and they would like to have a voice in the return of members to Parliament, who would look faithfully after their interest’.