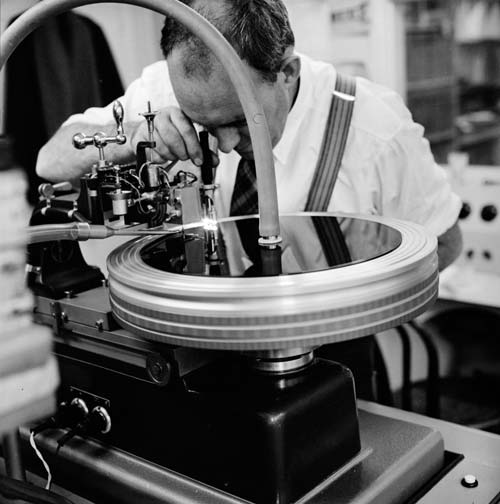 At the HMV (His Master’s Voice) factory in Wellington an employee examines the cutting stylus before a master record is cut. In 1957, when this photograph was taken, HMV was still focused on reproducing overseas hits for local sale. Two years later the company made the first record featuring the National Orchestra, playing New Zealand composer Douglas Lilburn’s Festival Overture. Until 1948 New Zealand recordings were processed and manufactured in Australia. The first record-pressing plant was set up by Radio Corporation of New Zealand in Wellington. The record presses used were Australian cast-offs. Over the next few years other record manufacturers began work, including the Stebbing Brothers’ Zodiac label in 1950, HMV New Zealand in 1953, and Kiwi Pacific in 1959.